The so-called Bufones are natural phenomena produced by the erosion of sea and rain in limestone rock, therefore creating galleries and chimneys connecting the sea and the coast. The most famous in Asturias are Bufones de Pria located at Llames de Pria in the Asturian council of Llanes not far from Gijon. 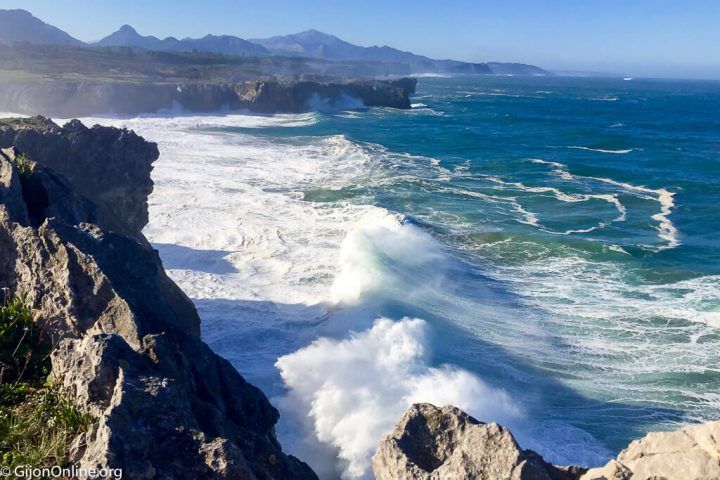 This town can be easily reached by the A-8 highway in the direction of Santander and take the exit shortly after Ribadesella to arrive at Llames de Pria (approximately 70 km.). If you feel adventurous, you can also take a small detour to visit the nearby villages such as Nueva de Llanes and discover their quaint streets. Once arriving at Llames de Pria, you must leave the car there and continue by foot to reach the cliffs.

These natural phenomena are better observed in its full magnificence during the days with a strong sea. The giant waves hit the cliffs creating the pressure that expels jets of water and air that can reach great heights. The name “bufones” comes from “bufar” which is the action of the air whistles when moving under pressure through the galleries and going out through the chimneys. In any case, even during calm sea, the coast views are spectacular.

There are as well beautiful beaches nearby such as Playa de Guadamia, Playa Villanueva, and Playa de Cuevas del Mar. The latter can be seen in the movie “You are the one” (2000) by Spanish director Jose Luis Garci.

There is a circular hiking route PR AS-57 with a low difficulty of about 4 hours that begins in Llanes de Pria until you reach the beach of Cuevas del Mar, to head back to the starting point. It provides the perfect opportunity to enjoy the views of the Asturian coast and the mountain range Picos de Europa.

On the way back you have the chance to observe once again the magnificence of the Bufones de Pria before leaving, and maybe try the Asturian natural cider at Llames de Pria. An optional tourist attraction is the nearby Mirador del Fitu, a breathtaking panoramic view from a higher altitude. Enjoy!

Nearby, Sightseeing, Things To Do

Asturias has a long mining tradition dating back to the XVIII century. The coal extraction concentrated around the so-called “Cuenca minera.” The mining industry declined in the area. The last active mining wells close down […]

A trip to the past at Asturias Railway Museum!

Culture, Sightseeing, Things To Do

The “Museo del Ferrocarril de Asturias” (Asturias Railway Museum) is located at a former train station at Gijon North. It dates back to the second half of the 19th century. Back then, it was open […]

Nearby, Sightseeing, Things To Do

The centenary church of Santa Barbara from 1912 converted into the Kaos Temple by artist Okuda This unique example of contemporary urban art play with geometric figures full of color. The Kaos Temple is only 25 […]